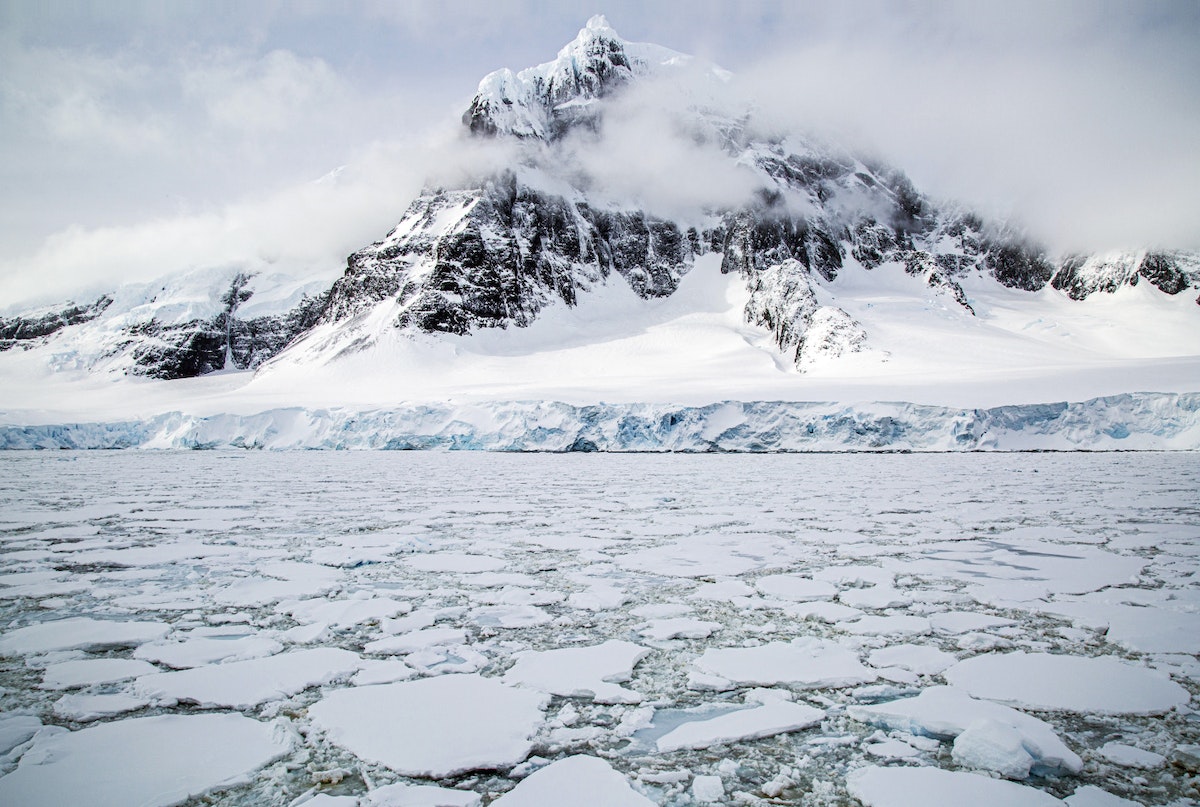 We’re a few hundred metres from the coast of Hydrurga Rocks, a snowy outcrop off the northwestern tip of the Antarctic Peninsula, when our Zodiac driver cuts the engine. We sit in an awed silence, our eyes scanning the mirror-like waters specked with crystalline shards of ice, when, suddenly, a humpback whale rises to the surface, flicking its tail in the air, a chorus of gasps and the clicking of cameras ending the quiet. Moments before, on the way back from land to our ship, we heard a loud exhale, perhaps the sound of a nearby whale breathing through its blowhole, and cut the boat’s motor. As we cruise the bay, keeping a respectful distance while these enormous, majestic creatures disappear into and reappear from the icy waters, I realise we’ve completely changed course; that following the original plan – getting back on board – is of no urgency. This, after all, is Antarctica, a place where schedules and itineraries play second fiddle to adventure.

We’re here with Aurora Expeditions, the Australian shipping company, on its new vessel, the Greg Mortimer, the first to feature the X-Bow, a revolutionary bit of tech that gives it a unique appearance. Designed to help ships tackle rough seas, it makes our crossing of the notorious Drake Passage – where we face some hefty swells – relatively smooth. The ship’s doctor tells us that on the line’s former research vessel, the Polar Pioneer, about 50 per cent more guests would have succumbed to seasickness in these conditions.

It’s taken days to get to this point already: from London to Buenos Aires, the beautiful Argentine capital, down to Ushuaia, the world’s most southerly city, on the tip of the South American continent. From there we sail down the mountain-lined Beagle Channel – a gentle introduction to the voyage before we reach the open seas. After a day and half of sailing, we arrive at Half Moon Bay, part of the South Shetland Islands – five days after we left England. The journey only adds to the feeling that this is no ordinary holiday: this is an expedition.

On the Drake Passage, we get a taster of what is to follow. Our first glimpse of an iceberg is a moment I’ll never forget – the entire ship rushes to the portside to take a look: it’s blue and enormous, alone in a vast expanse of ocean.

On the crossing, we also spot grey-headed albatross, storm petrels and shearwaters, which follow the ship’s wake as krill are churned up. A Norwegian word meaning whale food, these small crustaceans are at the centre of Antarctic life: the entire ecosystem depends on them, something we learn in an on-board lecture with Heidi Krajewsky, a naturalist who talks penguins, seabirds and seals with boundless enthusiasm. She’s part of a rotating expedition team and will do three cruises before taking a break, something that she says allows her and others to give their all during what is (we’re soon to discover) a demanding itinerary. “I know you’re excited about penguins,” she says, “but I want you to be excited about krill!” The expedition crew, which includes kayaker Al Bakker and historian Dr Ben Maddison, is led on this sailing by Howard Whelan, a softly spoken Australian who has been travelling to Antarctica for two decades. The team lead excursions, drive Zodiacs, provide historical and geographical context, and also make great lunch and dinner companions; they’re always on hand to answer the many, sometimes daft, questions that pop into your head.

The ship carries just 120 guests in polar regions, some of them kayakers, meaning everyone can go ashore at once – the International Association of Antarctica Tour Operators (Iaato) stipulates that ice landings are restricted to 100 people at a time. Aside from the odd research base, which are basically a scattering of huts, there is very little infrastructure in Antarctica, and landings are always by Zodiac. Before going ashore, we head to the mudroom to get ready, adding boots and waterproof jackets to our thermal layers. On Half Moon Bay – a rocky, snow-covered landing – we see our first cormorants and penguins, in this case chinstraps, named for the thin black line under their beaks. We’re disappointed when we learn we’ve just missed a seal, which with hindsight feels a little silly…

The next day we arrive at Hydrurga Rocks, where the water is icy, but the sky is blue, the weather clear, and the temperature hovering around minus two, meaning it’s easy to enjoy the island at a steady pace. As soon as we arrive we see a huge Weddell seal sprawled out on the ice, a fur seal down on the rocks by the water, more chinstrap penguins pottering about and, later, Adélie and gentoo penguins. At one point, we spot a trio of penguins – one of each of the above species – hanging out. The expedition team give you clear instructions about which paths to follow, to fill in any divots that penguins could fall into, and keeping your distance (that is, not getting within five metres of wildlife), but generally you’re free to wander around as you please. Often you find yourself sat still for an age, just watching penguins waddle about, a male bringing a rock for nest-building to a severely unimpressed female, them tumbling about, sliding down slopes. Scott Portelli, one of the professional photographers on board, says that patience is key to shooting Antarctica: wait long enough and something magnificent will happen.

That afternoon, we arrive at Portal Point, where the conditions couldn’t be more different – the heavy snow is coming down sideways and visibility is low. We can make out each other, but that’s about it. The stop is remarkable for being the first time we actually step onto the Antarctic Continent. That night, we toast those among us who today reached their seventh continent.

The next morning the plan is to head Port Lockroy, a British base with a post office where for a dollar you can send a postcard. It’s the closest Antarctica comes to having a famous port of call, so you’d imagine I’d be disappointed when we can’t visit it. November is much icier than later in the season, which means less wildlife (and no penguin nesting) and waters that are more difficult to navigate. But it’s the time when Antarctica is at its most beautiful – when draped in a snowy blanket this vast, pristine wilderness can be best appreciated. With Port Lockroy off the cards, Greg Mortimer instead heads down an ice-filled Peltier Channel and makes easy work of it; the ship’s hydraulic platforms are lowered for the first time, and we stand and watch, floating ice stretching to the horizon. An hour or two later and not only are the waters clear, they’re also teeming with life. A pod of killer whales, at first thought to be two adults and a calf, but later revealed to be six or more, swim beside the ship. We watch from our balcony as they glide majestically by, their fins dipping in and out of the water.

In the afternoon we’re invited to try out the line’s new inflatable kayaks, which it is considering rolling out across itineraries so that intermediary kayakers can have a go (they’re easier to get out of if they capsize). We head out with a guide, rowing over the still, reflective waters on our way around Cuverville Island, at the entrance of Errera Channel. We paddle beside towering icebergs, see groups of penguins cut across our path and, at one point, watch as a seal floats serenely beneath our kayak. What’s most striking is the silence. Aside from the occasional penguin call or cormorant squawk, once you stop paddling, there is not a sound. It’s something that amazes you every time you step off the ship: this is a place virtually untouched by humans and unpolluted by our noise.

The next day is one we’ve all been waiting for, or dreading, depending on your perspective: the polar plunge. A chance to swim in – or rather dive into and then frantically get out of – the icy Antarctic waters. Against my better judgment, I do it and it’s an exhilarating moment, but the best bit is the swig of vodka afterwards and 20 minutes thawing out in the sauna, where every returning plunger enters to a cheer. The atmosphere on board afterwards is jubilant, adding to the growing camaraderie established over the week: you very much feel like you’re on an adventure as a collective, not just on your own holiday.

One of the remarkable things about Antarctica is that every time you begin to find it familiar something incredible will happen – the spotting of a rare animal, an unexpected detour, a dramatic ice carving. There’s the call at Whalers Bay, in the South Shetland Islands, unlike anywhere else we’ve been on the trip or indeed before it. One of the epicentres of the brutal whaling and sealing industry, it is now eerie and abandoned, a decaying museum to an era when Antarctica and its wildlife wasn’t treated with the respect it deserves. And there’s the visit to Elephant Point on Livingston Island, when we think what we’ve seen can’t be exceeded: this is home to harems of elephant seals, which you’ll recognise from David Attenborough’s recent Seven Worlds, One Planet. The adult males are beastly, weighing up to four tonnes, and a little bit terrifying, especially when charging at each other.

And with that it’s time to head back home, the trip of a lifetime almost over – but not before the small matter of crossing the Drake Passage…